A project I've been working on recently requires that I set a group of pins (4 of them) on a Teensy 4.1 to certain values at roughly the same time. For simplicity, I'm using the Arduino libraries for this project (but writing C++). We can fortunately easily look under the covers with the Teensy's Arduino implementation. In this post I'm going to walk through a few bad ways this can be done, and the correct way (for Teensy 4.1).

The simplest possible way to set multiple pins is to just set them one at a time.

For example, we could write:

Compiling and running this code against a teensy and some LEDs, we can see (if we bump up the delay) that the lights flash on and off at about the same time. Let's try measuring the behavior with a slightly better tool than our eyes. I connected each pin to an oscilloscope. Channel 1 is pin 23, channel 2 is pin 22, and so on.

Let's take a look at both the:

Of course, this should not be surprising given that the code is setting the pin values one at a time.

This code compiles to something much more complicated that the simple "set pin x to value v" function calls would indicate. The Teensy 4.1 doesn't actually have any facility with which it can set a single output pin!

Instead, the output pins are mapped to GPIO port. Each port controls some number of pins, and, any assignment to a port will change the state of all the pins controlled by that port.

These ports are "mapped" into memory at well-documented address. To write to a port from a program running on the Teensy, the program just needs to write a value to a well-known address in memory (also called "registers"). When the memory system for the microcontroller observes a store to these magic addresses, it will do the electrical magic required to change the voltage on the appropriate pins.

For each port, there are two registers that we care about (and one that we could use, but aren't):

When writing to each of these registers, we supply a bitmask of the pins to modify. For example, we could write a mask like 1010 to some "set" register to turn on every other pin, then write 1010 to a "clear" register to turn them all off again.

Expressed this way, it looks really silly! We should clearly just turn on every pin on in the first assignment (we'll get there, be patient).

Inspecting the generated assembly code (which is actually how I figured out what is going on), we can see this behavior:

In this code above, r4 contains a base address for the list of registers. The offset [r4, #132] contains the SET register for the pins we care about and [r4, #136] is the CLEAR register.

As demonstrated by the scope, we see a small (but predictable) amount of latency on each of these sets because we're running 4 store instructions in quick succession. But, of course, we can do much better than this by getting away from the arduino apis.

It's easy to implement the appropriate GPIO port code by grabbing bits and pieces from the teensy arduino headers.

The generated assembly does exactly what we're looking for:

And, the scope shows a much nicer shape for both the rising edge and falling edge: 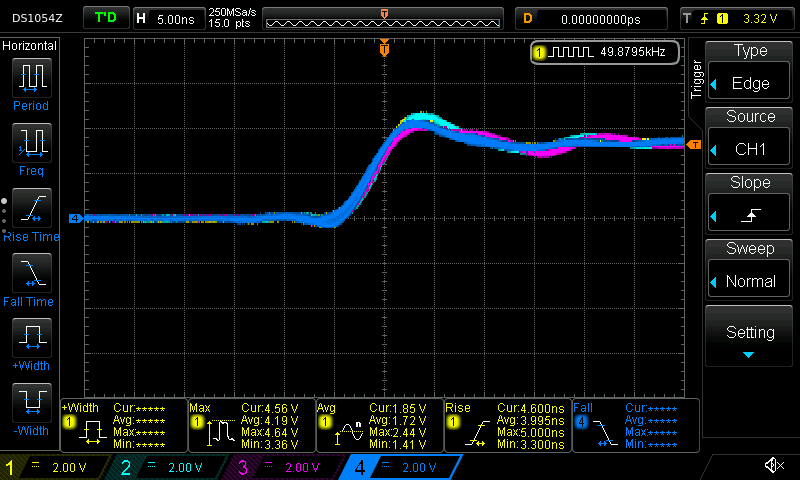 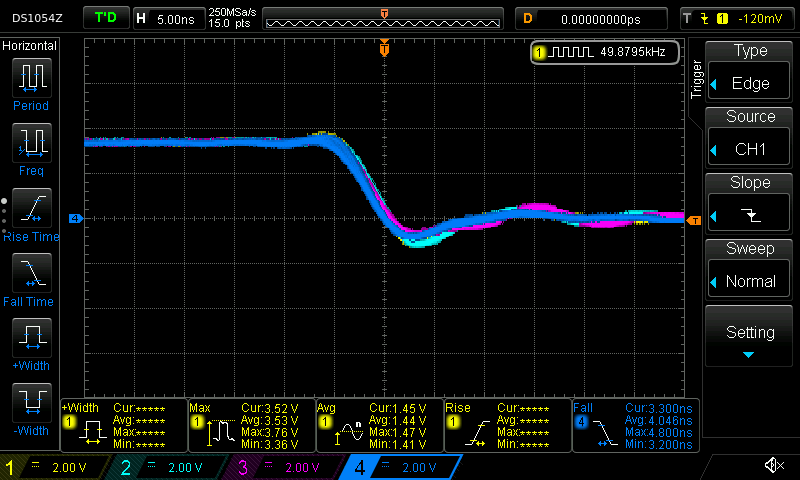 The Arduino APIs are fantastically useful for getting started quickly, but dropping to lower level APIs can be important. Fortunately, the Teensy makes it fantastically easy to dig around and use the chip when needed, and, the headers are even documented with where to look in the official manual! Awesome product.

I'm always looking for tools that have both a quick-and-easy beginner API, but don't necessarily sacrifice on depth for advanced use. So far the Teensy is filling that role well.

Suppose we replace the code with something a bit more flexible (and that was recommended in the arduino forums).

Something bad clearly happens when we run this code:

The inner assignment loop this time compiled into:

Inspecting the source for digitalWriteFast we can see that we've taken the non-compile-time-constant code path:

I'm guessing that the variability has something to do with additional memory access (lookups to figure out pin maps to what register). This probably could have compiled down to use all compile time constants, but this massive change in behavior for roughly the same code is reasonably spooky.