I've built a micro-benchmark which sends data between CPU 2 cpu cores. On my single AMD 3800X desktop CPU, I have crafted a microbenchmark which has different performance characteristics depending on pair of cores I select for testing.

Results like this should not be surprising on a multi-socket system, but this system has only a single processor. I believe this micro-benchmark is highlighting some of the features of the novel architecture on the new AMD chips.

Before diving in to Zen, I'd like to talk briefly CPU memory-caching systems.

Modern CPUs contain a variety of fast memory which cache accesses to the larger more expensive RAM. Usually we call the fastest, smallest cache L1, the next fastest L2, and the largest, but slowest cache L3. These caches communicate with each other to move data around (see MESI protocol).

Generally, each CPU has it's own L1 and L2 cache, but the L3 cache is shared by all of the cores. Something like this:

This style of L1/L2/L3 cache has been common in CPU designs for many years.

To talk about AMD's Zen architecture, there's a few terms we need to define:

Each Ryzen processor has one IO controller and some number of CCD dies. This CCD/CCX/IO controller strategy allows AMD to mass produce CCD chips, performance/correctness test the cores (this is called "binning"), then build a wide variety of different processor configurations.

The particular Ryzen 3800X I own has a single IO controller and a single CCD. The CCD contains two CCXs. Each CCX in my particular CPU has all 4 physical cores enabled. Each of those physical cores is capable of running two threads (see Simultaneous Multithreading (SMT)). 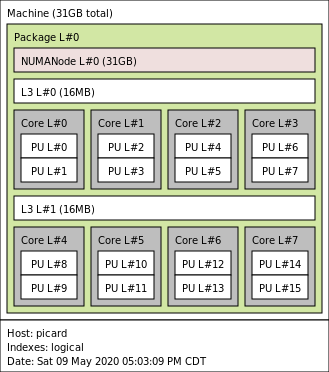 Interpreting the output, we can see that:

This likely means that cores in the same CCX can communicate with each other by reading and writing to their shared L3 cache. If cores from different CCXs need to communicate, they will have to use the infinity interconnect.

To verify my hypothesis, lets start with a classic pingpong roundtrip latency test.

The first thread starts timing right before sending "Ping", and stops timing once it sees "Pong."

I've plotted the mean core-to-core pingpong round-trip time for all pairs of cores (including the SMT cores). Latency for A->B and B->A were both tested (for no particular reason).

This plot is a heatmap of core->core pingpong roundtrip time, in nanoseconds: 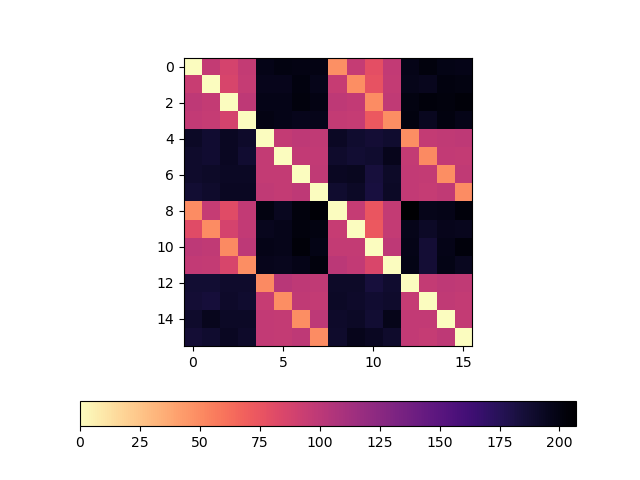 I do not have a good explanation for the upper and lower diagonal lines (at around 48ish ns), but, we can clearly see that pairs of cores for which latency was low share a common L3 cache (they are in the same CCX).

So, we know that there is a difference in latencies, but, does this really matter? Few applications actually have any reason to bounce a single value back and forth between cores.

When discussing latency, programmers who are more bandwidth focused will often (rightly) say something like "the latency doesn't matter, I only care about bandwidth." Most programmers are more focused on bandwidth than latency, because generally we care a lot more about throughput than latency.

Let's start by proving that, when moving around large chunks of data, none of this matters.

I've created a small tester which:

The region of memory that I am copying is 4 gigs large. This is much larger than any of the local caches. We should be able fire off a memcpy then sit back while the hardware prefetchers and cache hierarchy work their latency-hiding magic. 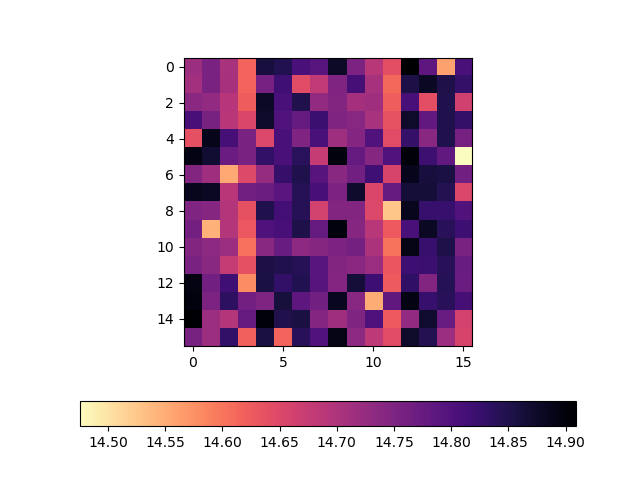 As we can see, we're pretty much getting a ~14.5-15 GiB/s copy rate regardless of the cores selected. This is good news. The new AMD core layout makes no difference when copying around 4 gig chunks of data.

We are often able to amortize high latency operations over large transfers or by work on something else to hide the costs of high latency. However, as data sizes shrink, it becomes harder and harder to hide latency.

Recently, it seems like (anecdotally) there has been a trend of using queues to move data/send commands in throughput-oriented applications.

When messages sent over these queues are small, we might be able to observe Ryzen's latency characteristics as a drop in throughput.

I've built a simple microbenchmark to test this. The benchmark runs a writer thread and some number of reader threads. The threads share a region of memory that contains a bunch of "chunks". The array of chunks looks sort of a like a single producer, single consumer queue:

In the benchmark, I've placed the array of chunks into a 2 megabyte huge page. I created a region containing 8192 chunks, and each chunk's data segment contains 8 cache lines (512 bytes) of data. The number of chunks doesn't seem to affect the benchmark much, but the size of the data segment does. I've kept the size low to highlight the effects I'm looking for, but, these effects seem to still be present for data sizes up to a few KiB.

Using the same style of plots that we've already see, let's first look at bandwidth reported by the writer. This plot shows the write rate when Y-axis core is sending data to X-axis core (rate is in GiB/s, I've again included the SMT cores):

There's some patterns in this plot that I have not been able to explain, but, there doesn't seem to be any significant variation in write rate when the reader core is on a different CCX. I'm reasonably confident claiming that the writer is unaffected by choice of core.

Here's the rates that the reader reported: 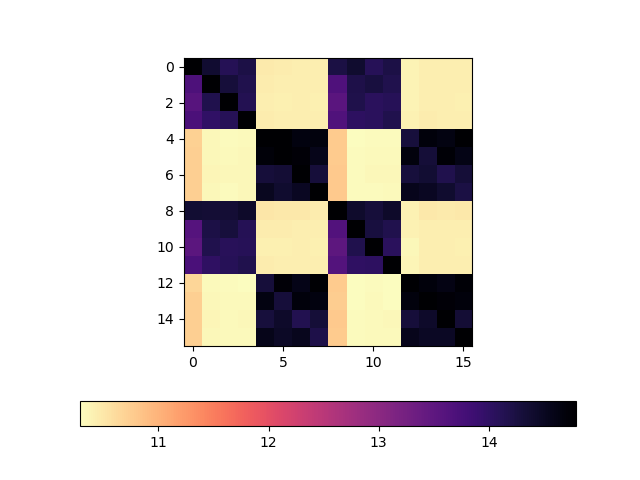 This is a significant enough difference to warrant careful attention when building high performance software.

This sort of behavior will not come as a surprised for programmers used to programming for multi-socket (multiple physical CPU) server systems (see NUMA). However, for those writing parallel applications, I feel like this effect is still notable and warrants slightly different considerations than traditional NUMA.

In a traditional multi-socket/multiple-physical CPU system, RAM is physically connected to only one of the many CPUS. If core0 of cpu0 needs to access memory physically attached to cpu1, it will pay a latency penalty to access this memory (this is NUMA - Non-Uniform Memory Access). However, we've also generally assumed that core0 can access any part of memory attached to cpu0 with the same latency. Therefore, applications built for NUMA architectures often focused on getting their data into the memory CPU attached to a CPU, then using the cores on that CPU to process the data.

For platforms like AMD's (and recent Intel, see Intel Mesh) we have to now make NUMA-style considerations any time we are operating over a piece of data on multiple cores, not just when dealing with multiple sockets.

Consider the specs for the EPYC 7542:

On the 7542, we have to divide this 128 MiB of L3 cache up into CCX cache slices. Assuming each CCX has 4 cores (which I think is correct), we'd have 32/4=8 CCXs on this CPU. Therefore, each CCX (4 cores) only has 16 MiB of "close L3 cache memory," accessing the rest of the cache will incur a small amount of extra latency.

I suspect that "networked" cpu architectures will become the new normal in the next few years. These new platforms are going probably going to be increasingly more and more sensitive to data access and data movement than the systems of the past.